It was a good weekend for a 36-hour 375-mile bike ride. I had my reservations going into the event since I hadn’t properly prepared for it. I actually haven’t prepared for any of the randonneur rides I’ve done this year. But 375 miles is a long way to ride when you haven’t been conditioning your feet, butt, and hands to withstand the stress. Shorter distances don’t seem so bad to me, but this ride really kicked me. Of course, I’m not too good at climbing hills, and this route had its share of elevation gain.

There were some 30+ ride participants, none of whom were women. I did not know a sole in this ride. The route started and finished at the Best Western Motel in Concord, MA. Intermediate controles were in Eastford and Willington (both in CT), Brattleboro VT, and South Deerfield and Williamstown (both in MA). The sleepover (optional) was in Williamstown before the 133-mile segment back to the motel in Concord. The weather was pretty much on the good side. It did get warm, but never brutally hot. There was some good fog and overcast, and even an occasional sprinkle (like in Amherst, MA).

This course definitely involved climbing. And my lack of endurance training, especially for the past 1.5 months, showed. I had brought along some Aspercreme with lidocaine in case I got “hot feet,” and I ended up using it not only on my feet but also the palms of my hands. My rump was a little warn out by the end of the ride. I’m definitely going to have to start doing some endurance training if I plan to enter the Taste of Carolina 1200k in October. I also found my headlight system I used on this ride was not adequate. I’m planning to upgrade before October rolls around.

As far as the ride went I tagged along with the fast group for the first 20 miles. I think there were 7 or 8 of us. I saw no point continuing at their clip (something like a 20 mph average) over small rolling hills. Soon before arriving at Ctrl-2 I was caught by 2 guys (Chris Pearson and Gary Sclar) who I rode with to Ctrl-2. They pretty much went my pace throughout the ride because I kept seeing them coming to the controles as I was leaving. At Ctrl-3 I had a short conversation with a rider (Jeff Mangieri?) who had been in the fast group, but he too had backed off. We rode together almost to the top of the big climb leading to Ctrl-6 (the sleepover controle). I fell off the back, and when it got dark it was tough coming down the hills with my headlight system.

It had been a long time since I’d visited Brattleboro. My recollection is that is where the cycling magazine VeloNews started out. But on this ride it was just the location of Ctrl-4. Of all of the controles, Brattleboro was the prettiest and the only one of note. The high temp for Day 1 was supposed to only be 77 degrees. But I was told by other participants that their Garmin devices were registering numbers in the 90s. Day 2 was pretty close to a duplicate of Day 1 weather wise. Fortunately the hot temps only came out in early afternoon and didn’t last all that long.

I arrived at Ctrl-6 for a meal and nap around 11:40 PM as I recall. Chris and Gary had beaten me there since they climb better than I do. And my riding buddy for much of the ride had gotten there, too. I never did get his name. I’m such a slacker when it comes to names sometimes. I got to bed around 12:30 after taking a VERY cold shower. And I was back out on the bike at 3:45. I finished the ride at just after 4 PM. My ride time was something like 36 hrs and 7 minutes. CLICK HERE for the official results page. So now I have a Super Randonneur series of rides under my belt. Don’t feel any different. Just two rides to go to get my RUSA Cup award: 1000k and 1200k. I know, they are the two long ones. But I’ve only been doing this stuff for 7 months now.

This route passed through four states: MA, CT, NH, and VT. So far this year I have also done rides that pass through PA, NJ, NY, and VA. Only two more states and I’ll qualify for the American Explorer award. I’m signed up for a 300k in MD in Sept, and expect to participate in a 1200k in NC in Oct. That should get me to the magic 10!

Below is an image of the route. Click on it to see the map at RWGPS. 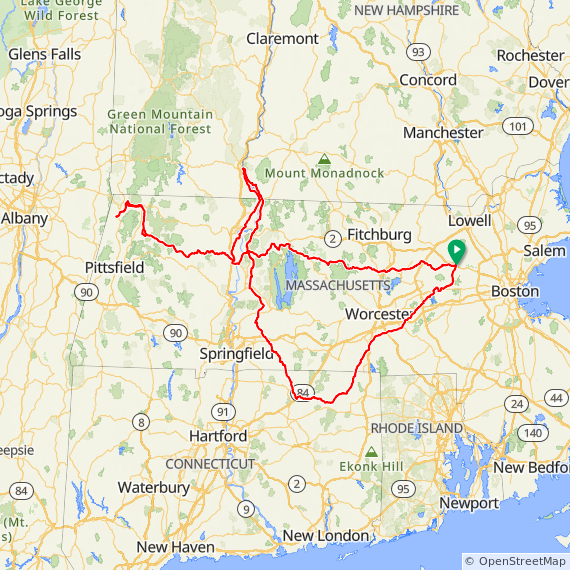