It was kind of damp out this morning after all the rain we had yesterday and even some into the night. By 10 it seemed to have dried up enough that I thought about going for a bike ride. Originally I thought I’d pull the CX bike out and head from home to Trenton and then get on the tow path and head up to Frenchtown. However, I got to thinking I might want to explore Nigel Greene’s “Breakfast in the Burbs” route he has listed on the RUSA site. It wasn’t too difficult to download the route file from RWGPS and upload it into PlotaRoute and tinker with it so it would be about 100k instead of 121k. I’m not one to ride over 50 miles at once very often. I can make an exception for an event or a 100k route. Anyway, 15 minutes later I had the GPX file installed into my Garmin eTrex 20x and at 11 I was driving over to Lahaska, PA (Peddlers Village) to start my ride.

Really nice route. I must say that Nigel put together a winner. I might just use some of it in some 200k brevets I’m designing. The ride took 4 hours and 40 minutes. I only made one stop for a quart of chocolate milk (mile 45/ Wawa). The temp was a little warm, but not overly so. Nice day for a ride. Click on the map below to see the route in RWGPS that I rode. 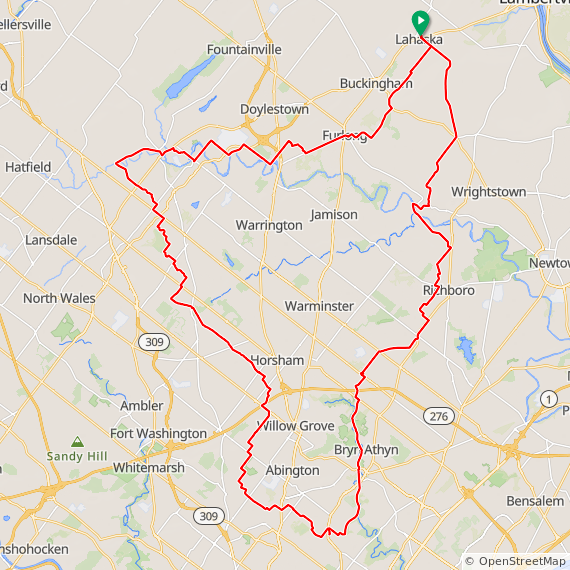 This entry was posted in Bike Route Maps, Ride Recaps. Bookmark the permalink.