Posted on December 2, 2017 by Jeff Lippincott

This event has finally come and gone. Phew! It completes the Cycling Challenge I took on back in January – that I had to do at least one 200k bike ride each month this year. There was a little more to the “dare.” The bike rides had to be events organized and offered by the Pennsylvania Randonneurs club. It wasn’t enough to just do a long ride each month when I felt like it or got around to it.

I had a big month of riding in October, but did very little riding in November. Coming into today’s event I had only ridden twice since the last Pennsylvania Rando event on November 11th. One ride of 10 miles this past Tuesday, and a second ride on this past Wednesday that lasted a whopping 20 miles.  With this said, I didn’t have high hopes of doing all that well on today’s ride. The goal was just to finish – and to not put out too much effort in doing so. There were a few climbs in the course, so avoiding “effort” would be a challenge in and of itself.

The weather for today’s ride was pretty good for an early December event. I think it was around 30 degrees when I clipped into my bike. There was no ice on the roads that I saw. And there was no rain, nor much if any wind to talk about. The sun came out a bit, and at the end of the ride when it was dark there was a nice full moon. I rode the second half of the ride with fingerless cycling gloves. So the temps later in the day were kind of mild as far as I’m concerned. The high temp for the day was supposed to get to 50 degrees. But I doubt that ever happened.

I rode in a group almost to the first controle. Kind of a large group. There were many of us who were comfortable riding together. I dropped a taillight and had to go back to try and find it on the road side. I was unsuccessful in my searching. Seemed to blend in with the numerous leaves on the ground where it fell. After that I rode the ride mostly alone. There was a 20-mile stretch where I rode with three others: Joe, Scott, and George. But I found myself having to push too much to stay in our group – so I backed off and rode in my comfort zone. I ultimately completed the event in 10:30. CLICK HERE to see the preliminary results. Now I’m ready to take a few months off from outdoor riding.

Click on the map below to see the route detail of today’s ride at RWGPS. 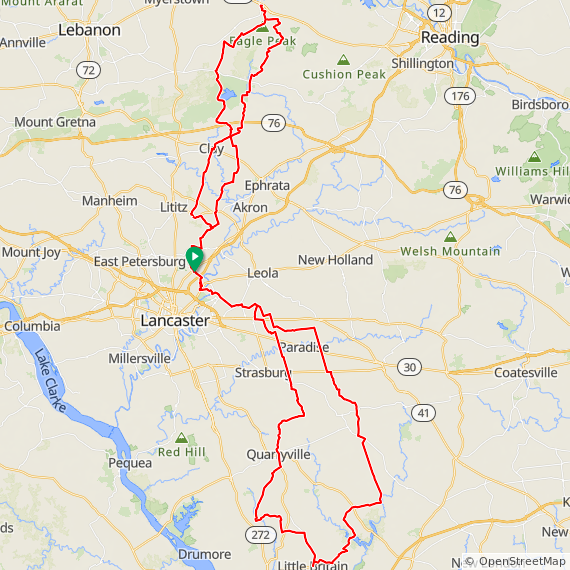 This entry was posted in Ride Recaps. Bookmark the permalink.