3324k for year. I met Pat and Cecilie Gaffney this morning at the Weisel Hostel at 2:00 AM to depart on the pre-ride for the upcoming Pennsylvania Randonneurs 300k event to be held on April 14. It wasn’t too cold at the start, the sky was pretty clear, and there was a full moon. I was sleep deprived at the start since I had ridden a PFW B+ ride the day before and then watched the Villanova college basketball game from 9 PM to 11PM. However, the ride went very well. Our breaks at the controles were longer than I would have taken on my own, but I didn’t care about a time.

At mile 78.1 we turned onto Community Drive which is a park road. There were 4 traffic control cones posted at the entrance to the park there, and we were warned the road was not open to through traffic. The past couple of storms had caused several trees to fall across the road and power lines were down. The three of us were able to get by, but it really was messy.

I surprised myself today by not having much trouble climbing the two hills I don’t particularly enjoy on this route. The first came at mile 38.4 – Blue Mountain Drive. And the second came at mile 112.6 – Old Mine Road.

And the only real bad on the ride for me happened around mile 150 when my rear gear cable snapped at the shifter forcing me to ride in a 34×12 gear. I was able to adjust the rear derailleur so I could use a 15 instead of a 12. But that was not going to be conducive to the hills yet to come in the ride. About 7 miles later I found a homeowner who had an auto garage and he loaned me a pair of pliers so I could shorten my chain and make it a single speed stuck in 2nd gear. That would allow me to tackle the hills, but the gear was too small to ride any faster than 10 mph on the flats. So I did a lot of coasting to finish the ride.

I parted ways with the Gaffneys between the time the cable broke and stopping to shorten my chain at the homeowner’s garage. There was no point having them creep along for 37 miles to keep me company. Click on the map below to see the results of my ride at Garmin Connect. 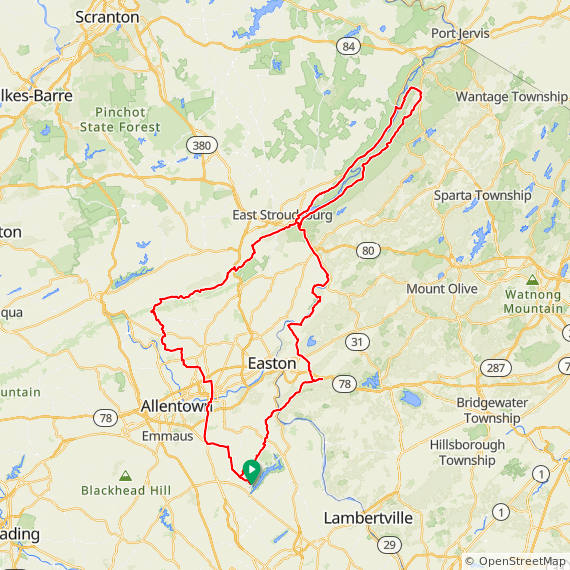