I met Bill O and Chris N at the Weisel Hostel at 4 AM outside of Quakertown, PA this morning to do the pre-ride for the upcoming May 5th PA Randonneur 400k event. The weather was nice for a long ride except for the somewhat significant headwind we had to deal with for the first 100 miles. I had never ridden this course. I pretty much liked it. Not sure if I would want to do it over and over again. But it was nice for a 1-time shot.

Bill and Chris know each other a lot better than I know either of them. I felt like I was accepted into their ride so to speak. Had fun. It was pretty uneventful. We saw a family of fox, and then later another fox or two along the ride. Late in the ride as we were approaching NJ we found ourselves on a road that had lots of large and small toads. Been a while since I’ve seen so many toads out.

My left knee started to act up a little with about 50 miles to go. My left achilles tendon was a little sore and I apparently tried to give it a rest and that’s when my knee started to act up. I’ve never had a problem with Iliotibial Band Syndrome (ITBS) or IT Band problems before, but now I know what it’s like. I could barely drive home after the ride my knee was so messed up. It should get better somewhat quickly since I don’t think I tore anything. It better get better quick because I have to do a 600k pre-ride on May 4th.

The three of us stayed together for pretty much the entire ride. My chain fell off and got wedged between the frame and cranks on the hill just as we departed Reigelsville. Bill and Chris kept going. I lost touch with them as a result and then unknowingly passed them. Our brevet cards all indicate we finished together even though I was a little bit (15 minutes) ahead. Click on the map below to see the record file of the ride at Garmin Connect. 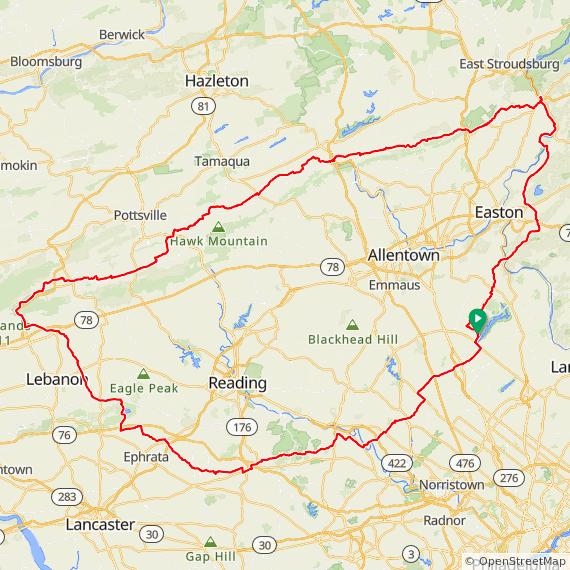