This morning Bill O and I departed at 4:00 AM from the Weisel Hostel to do the pre-ride for the upcoming Pennsylvania Randonneurs 600k ACP Event to be held on the 19th. We encountered no real problems, and the weather was close to ideal for such a long ride. I had injured my left knee a week ago and I was not sure I would be up to doing this ride. I hadn’t ridden a bike since doing the 400k pre-ride a week ago. Anyway, my knee held out for about 70 miles on this ride before giving me problems. It was a struggle, but I finished the first 400k vowing to quit at that time. Chris N at the hostel played some psychological mumbo jumbo on me that got me to continue on toward the end of the 600. I had pulled the same thing on him the week before when he was questioning himself on the 400k ride. Such is life.

A few comments regarding the course. When we got to the second controle in Danielsville we were expecting to see a Shell Mini Mart. The Shell signs are gone, but the mini mart is still there. Same management, but when they signed our brevet cards they commented that it still called them a Shell Station. Bill O took a picture of the new sign outside. I don’t remember the new name for the controle.

We made a very short stop at Controle 3, but did not go in. We weren’t hungry and we didn’t want to sit down. The address on the cue sheet for the diner here differs from the address listed on Google Maps. The correct street address is 6238 US-209, not what the cue sheet says.

Before getting to Controle 5 (The Corner), at mile 121.2 the RWGPS file I used for the ride told me to bear right onto Kelly Road. Neither Bill or I took Kelly Road since it is not maintained and had considerable debris on it. We stayed on the main road, Route 590. I’m not sure if the GPS file was wrong, or that the cue sheet should be updated. I recommend not taking Kelly Road.

When we made it to Port Jervis both Bill and I were more thirsty than hungry. So we opted not to visit Mullers Diner. We stopped across the street at the Mobil Mini Mart, 1 Kingston Ave, Port Jervis, NY 12771 (845) 856-4849. This was a very appreciated stop for me. I’d recommend making Controle 6 open so riders have a choice where they want to go.

The remainder of the ride was totally uneventful. My knee gave me some problems on PA-23 approaching Controle 11 in New Holland. Had to take some of the hills real slow. But later my knee did not hold me back so much on some of the climbs after Controle 12.

We saw a bald eagle while riding in NY. And we saw our share of opossum and porcupines, too. I’m glad I did this ride. Had never done it before as a complete unit.

Click on the map below to see the route. I recorded the route while I rode it. The map is not someone’s mapping of a cue sheet, but instead is an actual recording of a route ridden. 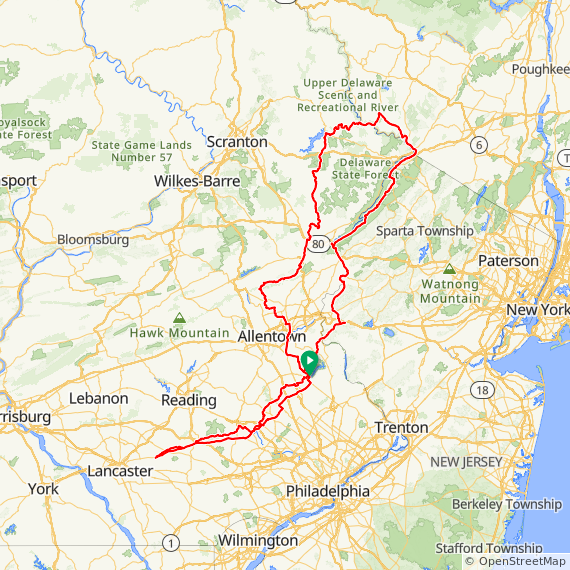